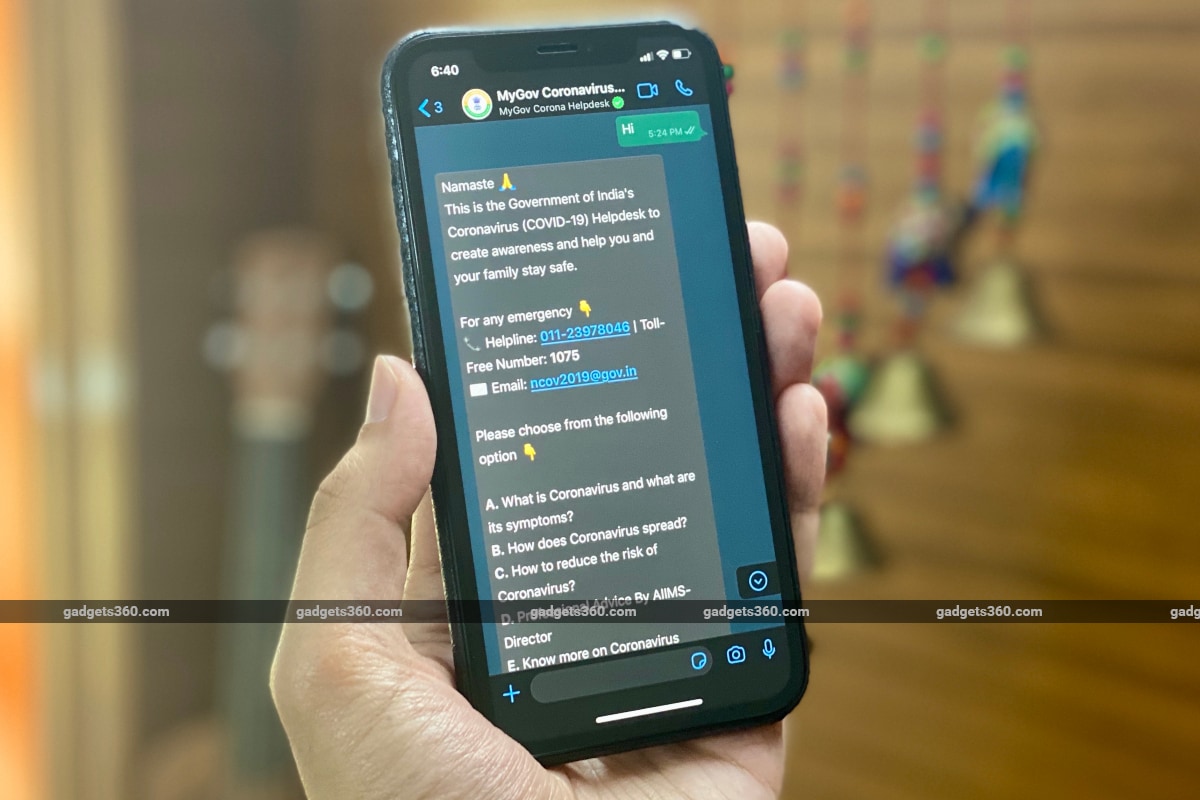 MyGov Corona Helpdesk, the official WhatsApp chatbot by the Central Government that was aimed to eradicate fake news and spread awareness about COVID-19, has crossed the milestone of 1.7 crore users in 10 days of its launch. The chatbot is designed to serve information about the disease that is believed to be caused by the Novel Coronavirus (known as SARS-CoV-2). Initially, the MyGov Corona Helpdesk was launched in English, though the government expanded its scope by bringing support for Hindi. The government also recently expanded coronavirus awareness initiatives by launching a MyGov Corona Newsdesk channel on Telegram and a dedicated Corona Helpdesk chatbot on Facebook.

The MyGov Corona Helpdesk was launched by the Indian government on WhatsApp on March 20. It crossed the mark of initial one crore users and processed over 1.4 crore conversations from users across the country within the first week of its launch. The user base expanded to over 1.7 crore users along with total conversations hitting the milestone of 2.5 crore on March 30, Haptik, the company that developed the chatbot revealed to Gadgets 360. 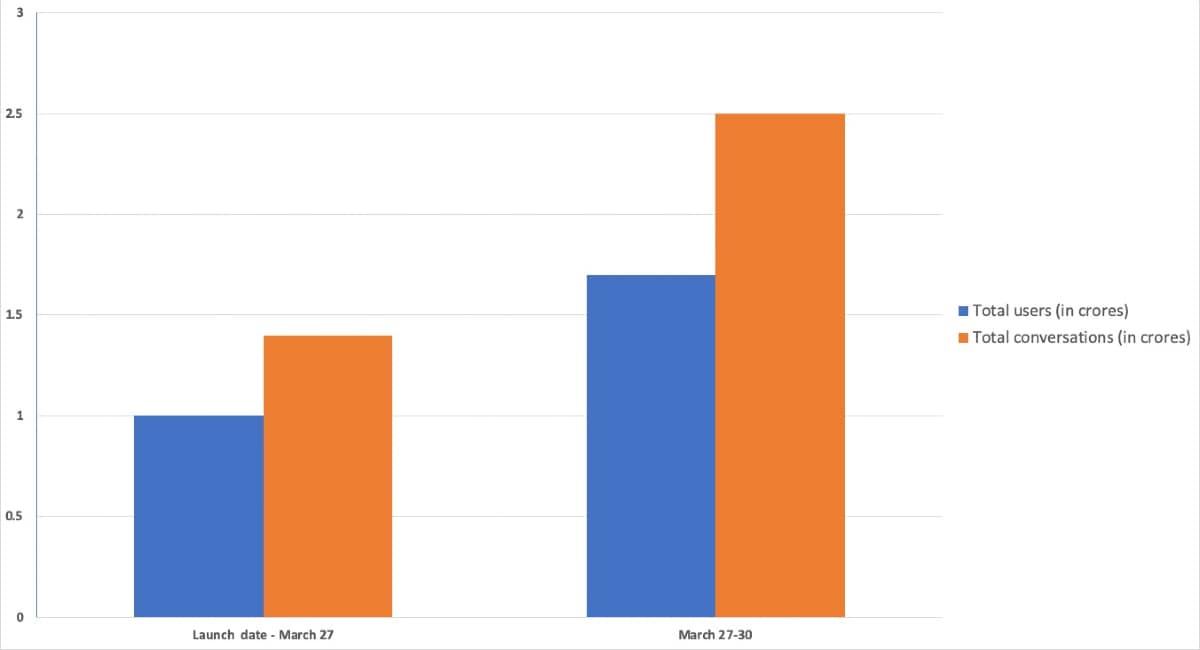 Even though the chatbot gained a lot of traction shortly after its launch thanks to the coverage by various Indian and international media houses, its daily user growth more than doubled after Prime Minister Narendra Modi announced its existence in a video conference on March 25, while highlighting various ways to spread social awareness to fight COVID-19.

As per the data seen by Gadgets 360, the MyGov Corona Helpdesk chatbot had 17 lakh daily active users on March 25 — on the day when the Prime Minister mentioned its availability to the public. But that number grew more than double to over 35 lakh daily users on March 26.

The sudden spike in users made it difficult for the Haptik and WhatsApp teams to handle the additional traffic for a few hours.

“That was a tough time,” recalled Aakrit Vaish, Co-Founder and CEO, Haptik, in a telephonic conversation with Gadgets 360. “We, both Haptik and WhatsApp, weren’t prepared to handle the kind of scale that suddenly we got hit with.”

The development team behind the chatbot was able to restore the experience after about three or four hours by making various changes in the underlying technologies. Some technology and infrastructure tweaks were also made to ensure that the bot can respond to user queries instantly.

Initially, the MyGov Corona Helpdesk chatbot was launched in only English, though in a few days after its debut, the team included Hindi support. This means that it can be used by a large number of people who don’t understand English. The team, however, doesn’t have any concrete plans to expand language support to other Indic languages.

“We are working with the MyGov team to figure out if and when we want to do more languages,” Vaish told Gadgets 360.

Having said that, the chatbot does provide access to state and language specific chatbots offered by the Gujarat, Maharashtra, Karnataka, and Kerala governments. 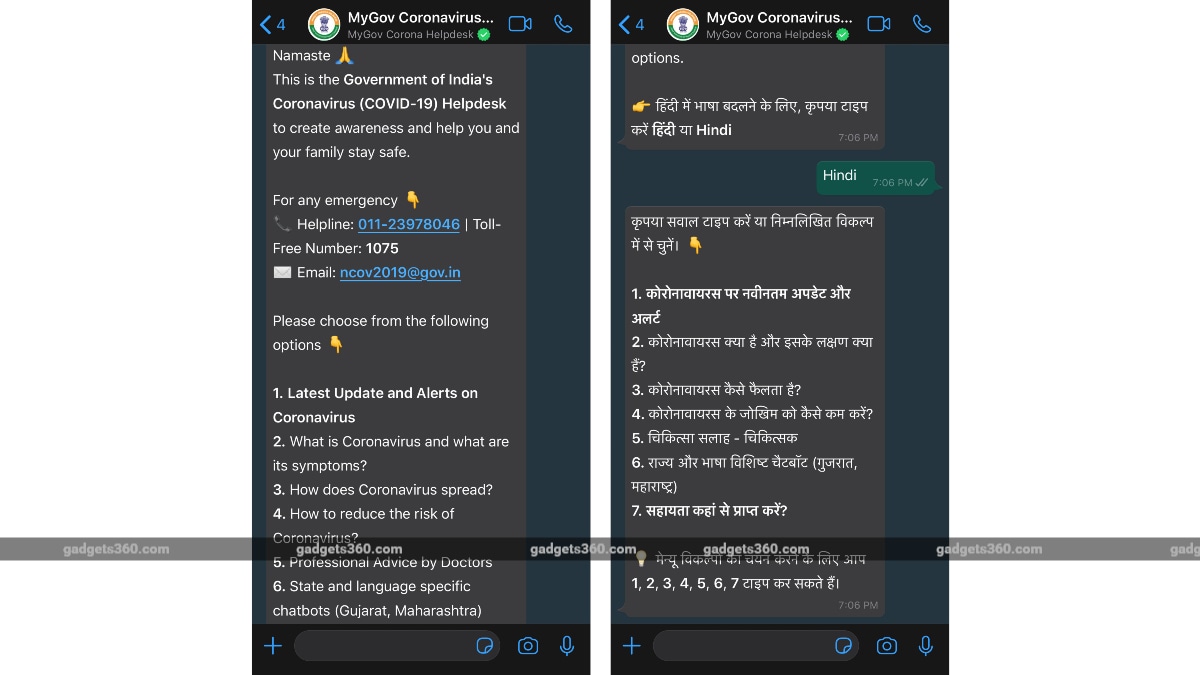 Users can begin with the MyGov Corona Helpdesk by simply saving the number – 9013151515 in their contact list and then send a message to the chatbot. Alternatively, a direct link to the chatbot is also available to let users easily begin their conversations with the software that uses machine learning and artificial intelligence (AI) algorithms to provide a set of information.

In terms of content, the MyGov chatbot on WhatsApp provides details about the key COVID-19 symptoms, professional advice from AIIMS-Director, and basic knowledge about the coronavirus outbreak. It also includes the helpline number and email ID assigned by the government pertaining to the pandemic. All this helps to understand the disease without relying on any unverified information received through social media platforms. Furthermore, users can also share the information directly from the bot by copying the text or forwarding the messages it sends over WhatsApp.

The MyGov Corona Helpdesk isn’t the only chatbot by the Indian government. Telegram users can access the dedicated MyGov Corona Newsdesk channel. Similarly, there is also a similar chatbot on Facebook. Some state governments in the country have also brought their own bots for social media platforms to give official information and updates related to the coronavirus outbreak.

International bodies such as the World Health Organisation (WHO) and the US Centers for Disease Control and Prevention (CDC) also have their dedicated coronavirus-focussed chatbots for the public.