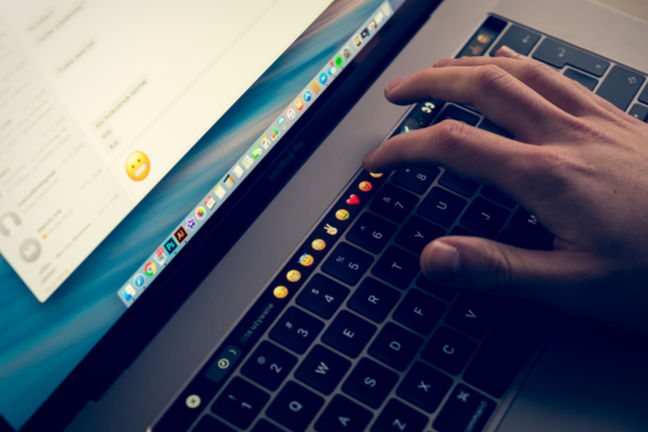 iGiant not only screwed up the wiring, it knew it was shipping dodgy gear, it is claimed

Apple is potentially facing a class-action lawsuit over the failure of displays on its MacBook Pro line.

The Cupertino iGiant is the defendant in a complaint [PDF], filed in a US federal district court in California this week, alleging violations of both state and federal consumer protection laws as well as fraudulent concealment.

Apple did not respond to a request for comment on the suit, which hopes to attain class-action status.

Named plaintiff Mahan Taleshpour is suing on behalf of all folks in America who purchased a MacBook Pro model year 2016 or later. The suit claims Apple knew of, and concealed, a design defect in the connection between the MacBook Pro’s display and base. The defect causes the cable connecting the two halves of the notebook to gradually wear down over time.

According to the complaint, Apple built the MacBook Pro with a ribbon cable connector that was a few millimetres too short. This caused the cable to press against the controller board for the display.

“At first, these cables function correctly. But their length and placement causes them to rub against the control board each time the laptop is opened or closed,” the suit claimed. “This consistent rubbing slowly causes the cables wear and tear over time.”

It is said the defect does not manifest during the first year or so of operation, when the MacBook Pro is covered by the standard warranty.

Rather, after a longer period of time, users notice the display backlight begin to fail, first as a “stage lighting” effect where portions of the screen are brighter than others, then as a complete failure of the screen when the MacBook is opened beyond 40 degrees.

By the time the screen fails, it is claimed, the notebook is well beyond warranty and the user has to pay several hundred dollars to have the screen replaced.

Apple was said to be very much aware of the problem as newer models were equipped with a slightly longer connector cable. The complaint also claims the failures were so common that Apple Genius Bar technicians were easily able to diagnose the cause, and Taleshpour’s attorneys pointed out that in 2019 Apple launched a free repair program for the 13-inch models.

The 15-inch notebooks, however, were not included in the repair program, and the suit contends that all MacBook Pro buyers, regardless of whether they got a repair or a fixed model, were wronged by Apple and are due a payout.

“Apple promoted and sold MacBook Pros it knew were defective because they contained a display screen certain to fail prematurely,” the suit claimed.

The suit seeks damages and attorney fees, though the most likely outcome in these sort of legal action is a settlement that will include a small refund for MacBook Pro owners and a set-aside to pay the lawyers. ®