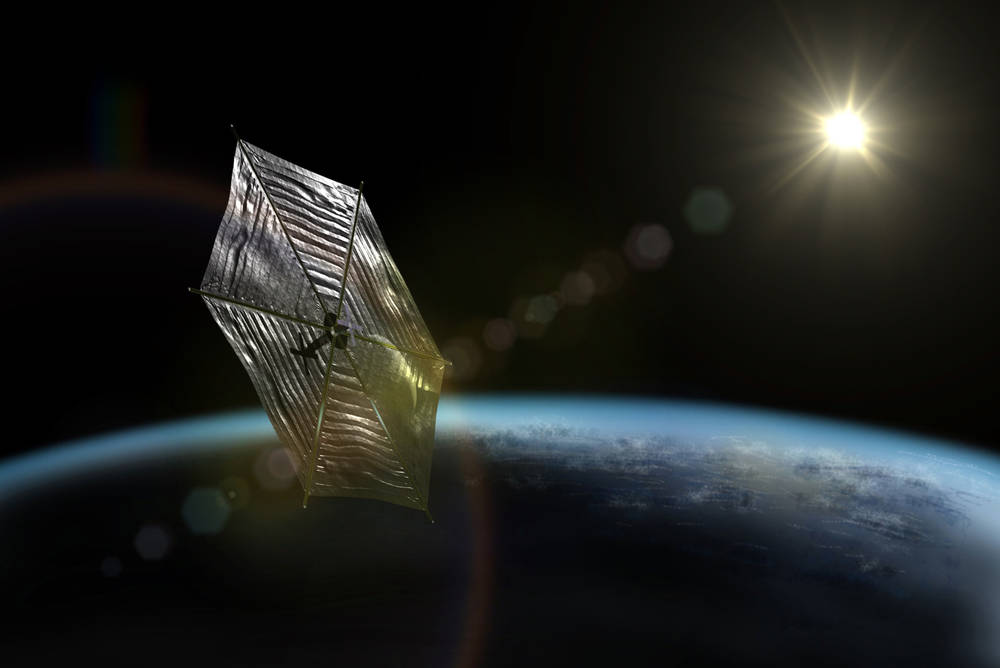 Nice way to get to Alpha Centauri though boffin tells us: ‘Such a laser system could be used as a weapon’

Coin-sized pieces of graphene can be accelerated by firing low-powered lasers at them in micro-gravity conditions, say scientists. The technology could be a stepping stone to graphene solar sails, which could propel future spacecraft using starlight or a laser array.

The material was developed at Delft University of Technology in the Netherlands, and Scale Nanotech, a startup in Estonia. The project, backed by the European Space Agency, is experimenting with graphene to develop prototype light sails.

“Light sailing is the only existing in-space propulsion technology that could allow us to visit other star systems in a human lifespan,” the scientists stated in a paper, published in Acta Astronautica. “In order to best harness radiation pressure, light sails need to be highly reflective, lightweight and mechanically robust.”

To make these sails, the team crafted an atomically thin 2D film punctured with tiny holes, and covered it with a layer of graphene. Next, they traveled to the ZARM drop tower, a laboratory at the University of Bremen, Germany, that uses a 146-metre steel tube to simulate micro-gravity conditions to test their graphene coins. When the material was dropped inside and floating effectively weightlessly, it was accelerated 1 m/s2 by zapping it with a 1W laser. The photons in the laser light exerted a pressure on the material causing it to move faster and faster.

A close up of a graphene light-sail prototype … Its surface is punctured with holes to reduce its overall mass.

In space, light sails could be powered by sunlight rather than lasers: the Sun’s rays, for instance, would provide a way for probes to travel without the need to carry heavy fuel, such as liquid propellant, and engines. However, to sail at decent speeds, the material needs to be expansive in order to catch enough of the Sun’s photons. And as the sails move further from the Sun, they’ll slow down. There is hope, though: scientists believe it may be possible to nudge the sails along with an array of lasers. The array could be on Earth, a base on the Moon or Mars, or on an orbiting platform, we reckon.

Santiago Cartamil-Bueno, coauthor of the paper and the leader of the GrapheneSail team at Scale Nanotech, believes “graphene is part of the solution” to developing practical light sails.

“We demonstrate a novel sail design that reduces the overall sail mass by using perforated films,” Cartamil-Bueno said. “By covering the holes with graphene, the full area of the sail is again available for optical performance at minimal mass cost. The fabrication is relatively simple and could be easily scaled up to squared kilometres, although the in-space deployment of such a giant sail will be a serious challenge.”

Just how big the sail would have to be depends on how fast it needs to reach its target, Cartamil-Bueno told The Register this week: “The US Breakthrough Starshot envisions a sail of about 14m2 at four grams traveling at 15 per cent of the speed of light to reach Alpha Centauri in 30 years with the help of 8.5GW lasers. Graphene sails of such a size enable these types of extreme sails.”

The biggest challenge is the sheer amount of laser power needed, he said. Not only does it require the synchronization of thousands or millions of lasers, it may pose a political dilemma, too. “Such a laser system could be used as a weapon, and not many nations will trust it being there,” he said.

The most successful light sail experiment to date is the Interplanetary Kite-craft Accelerated by Radiation of the Sun, or IKAROS for short, an experimental spacecraft launched by Japan’s space agency in 2010. The probe flew past Venus thanks to its 340kg square-shaped light sail, measuring 14 x 14 metres, made out of polyimide.

The Planetary Society also launched its LightSail 2 model into orbit around Earth last year, and released a few images of it travelling in space. ®

TicWatch Pro 3 GPS With Snapdragon Wear 4100 SoC, Up to 72 Hours Battery Life Launched
TikTok Files Complaint Against Trump Administration to Block US Ban: Report
In a world where up is down, it’s heartwarming to know Internet Explorer still tops list of web dev pain points
Redmi 9i to Go on Sale in India Today via Flipkart, Mi.com: Price, Specifications
FBI boasts of dark-web drug bust: 179 collared around the world, $6.5m in cash and 500kg of narcotics seized