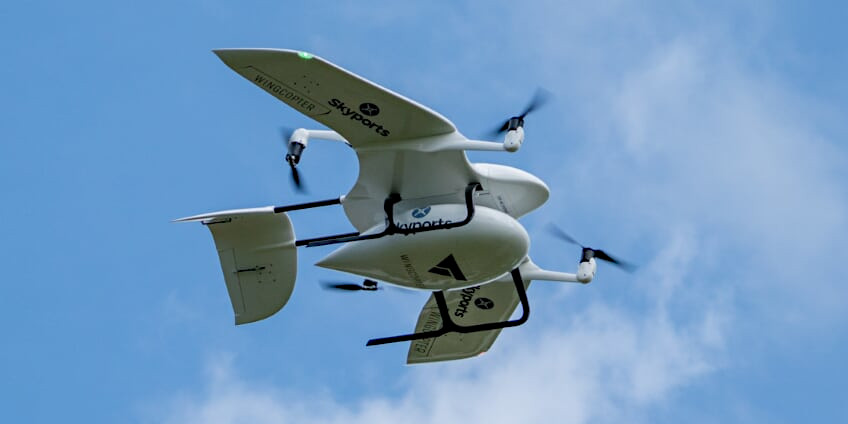 Remote-control drones are to be used to deliver coronavirus testing kits to a remote Scottish hospital – and they’re being flown outside of the operators’ direct line of sight.

Backed by the local NHS trust, drone firm Skyports will fly drones between the Isle of Mull and Oban, the closest town on the Scottish mainland.

“Our trial in Argyll and Bute provides an important short-term response to the current pandemic and lays the foundations from which to grow a permanent drone delivery operation across a network of healthcare facilities around the country,” said Skyports chief exec Duncan Walker.

His company will fly unmanned delivery drones made by German company Wingcopter. The craft will fly the 17km (10.5 miles) between Lorn and Isles hospital in Oban and Iona Community Hospital in Craignure. A lengthy journey by road and ferry, Skyports reckons it will take just 15 minutes by drone.

Average projected speeds of 40mph (64kph) for the drone compare very favourably with Google Maps’ guesstimate of an hour and a quarter to cover the 12 miles (about 19km, including roads) via the ferry between Oban and Craignure.

The trial will take place over the next fortnight, finishing in the first week of June. While it makes perfect sense to fly in the height of summer when the weather is good, The Register notes that BVLOS flights in the depths of a typical Scottish winter might not turn out so well; drones are small, light and vulnerable to bad weather.

Eye-catchingly, the trial will take place using beyond-visual-line-of-sight (BVLOS) rules, requiring special permission from the Civil Aviation Authority (CAA). Drone flights that go beyond the operator’s line of sight are normally prohibited; however, the main perceived benefit of aviation drones cannot be realised until the tech is proven safe enough to be flown without a watchful human nearby in case of collisions.

A few years ago the Ministry of Defence weighed in on the BVLOS debate, having secured some limited exemptions to get its unmanned Predator Protector drones into British skies. With a former head of the Royal Air Force having been recently appointed chairman of the CAA, with a brief to encourage “technology development”, the number of commercial BVLOS drone flights in the UK will doubtless increase – slowly but surely – in the coming years. ®

TikTok Banned: How to Download All Your Videos from the App
Tune in and watch live right here this week – it’s your email encryption wake-up call
It’s a tough time for digital transformation in the financial services world – but fret not, there’s help at hand
5 PC Parts That Tend to Die: How to Extend Their Lifespans
Sprint 5G is no more, as T-Mobile focuses on its own network