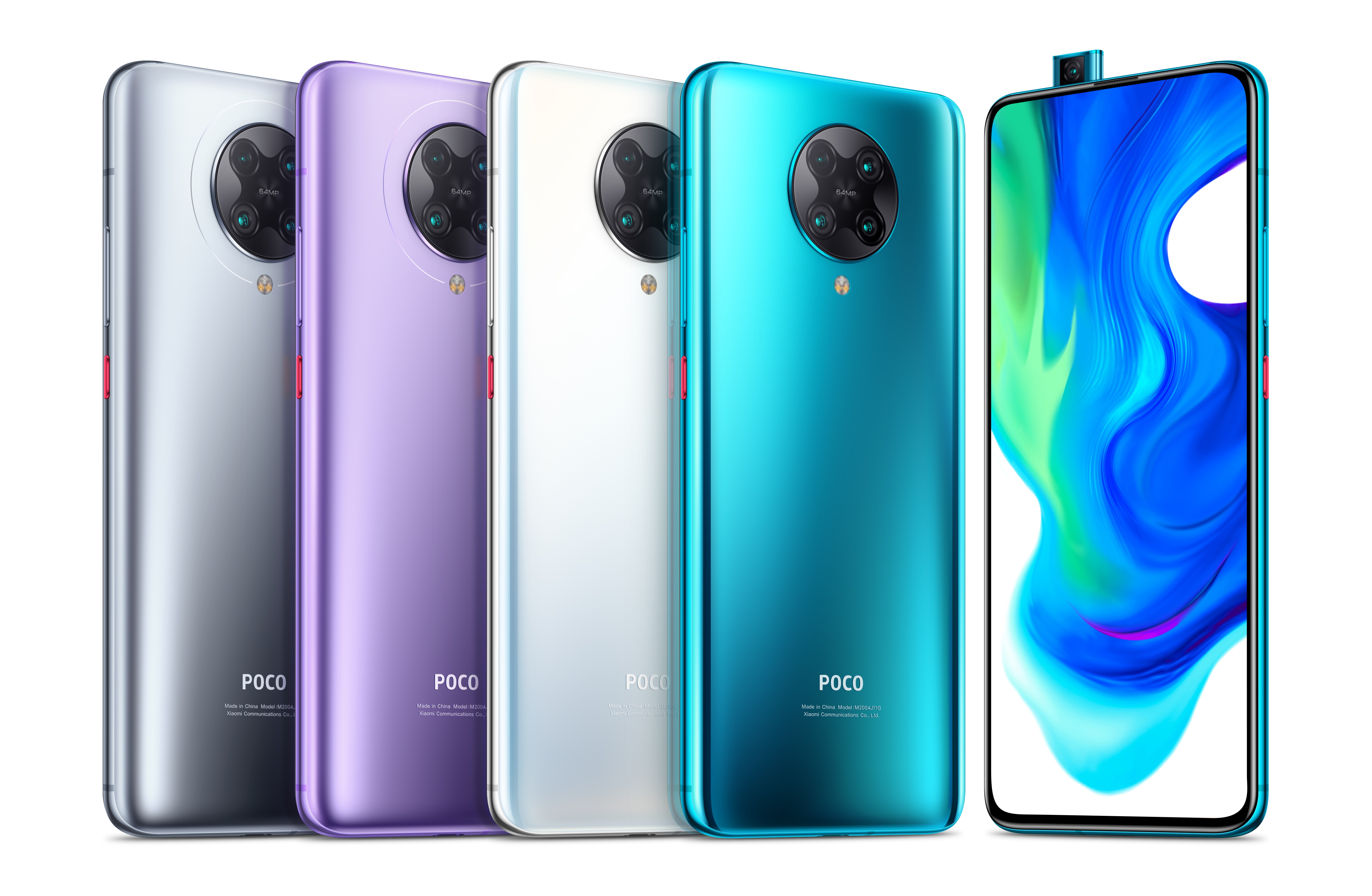 The dual-sim, 5G-enabled Poco F2 Pro packs Qualcomm’s Snapdragon 865 platform. The first slew of phones will come with 8GB of LPDDR5 RAM and 256GB of UFS 3.1 storage. Xiaomi also intends to launch a cheaper version later in the summer, with 6GB of LPDDR4X RAM and half the amount of storage.

On the imagery front, the Poco F2 Pro uses a 20MP front-facing camera, which is hidden on a pop-up mechanism. Sat in the back is a quad-camera constellation, headlined by a 64MP Sony IMX668 primary sensor. There’s also a 13MP ultra-wide-angle lens, a 5MP tele macro camera, and a 2MP depth sensor.

The display is a 6.67-inch AMOLED affair, with a standard 60Hz refresh rate. Since the selfie camera is hidden within the body, there’s no hole-punch cutouts or notches to blemish the screen. Of course, there’s a longevity concern here, given solid-state components are less likely to wear over time.

The Poco F2 Pro has a generous amount of connectivity, including a 3.5mm headphone jack, USB-C, NFC, and an IR blaster. It also supports 30W fast charging, which it claims can replenish the 4,700mAh battery in just 63 minutes.

Xiaomi’s Pocophone lineup is an interesting beast. First, there’s the branding – although that’s hardly surprising given Xiaomi’s fragmented (and often confusing) approach to nomenclature. Also noteworthy are the specs, which feel decidedly out of place on a device with mid-range pricing.

There’s a reason for that. Most flagship phones come with generously padded margins, with components reportedly only representing 45 per cent of the ticket price of the iPhone 11 Pro Max. The Samsung Galaxy S20 Ultra 5G has similarly inflated margins.

Xiaomi is more concerned about volume, with its devices typically having single-digit margins, according to its CEO. Xiaomi’s also a relatively leaner firm, spending less on marketing than its older rivals, and operating without a large retail presence. It also has a simplified development workflow, using off-the-shelf components, and exercising a relatively lighter touch when it comes to software.

The Poco F2 Pro is available in the Cyber Grey (or, as normal people call it, “grey”) hue from Xiaomi’s online storefront. It’s not yet known whether any carriers have opted to sell it from their (recently unlocked-down) shops. ®

Redmi 9i to Go on Sale in India Today via Flipkart, Mi.com: Price, Specifications
Apple Buys Cherry From Avengers: Endgame Directors, the Russo Brothers
Alphabet promises to no longer bung tens of millions of dollars to alleged sex pest execs who quit mid-probe
HP AIO 24, Pavilion 27 All-in-One PCs With Pop-Up Webcam, 10th-Gen Intel Core Processors Launched in India
Can The Register run Crysis Remastered? Yes, but we don’t see why you would want to