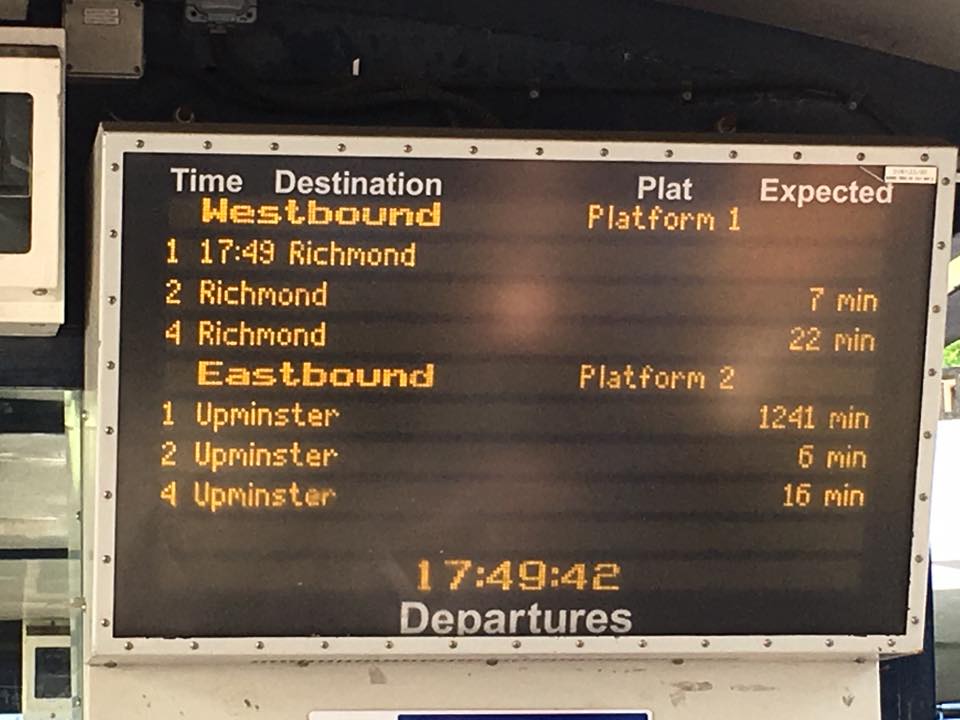 Bork!Bork!Bork! Welcome to another in the The Register’s inexplicably long-running series of sickly signage and distressed displays.

Spotted on the platforms of London’s Gunnersbury station by Register reader Julian, the display looks innocuous enough at first glance. However, something is amiss within the bowels of the UK capital’s Transport for London (TFL) since even at its least competent 20 hours seems a bit long to wait. Even for a tube to Upminster. 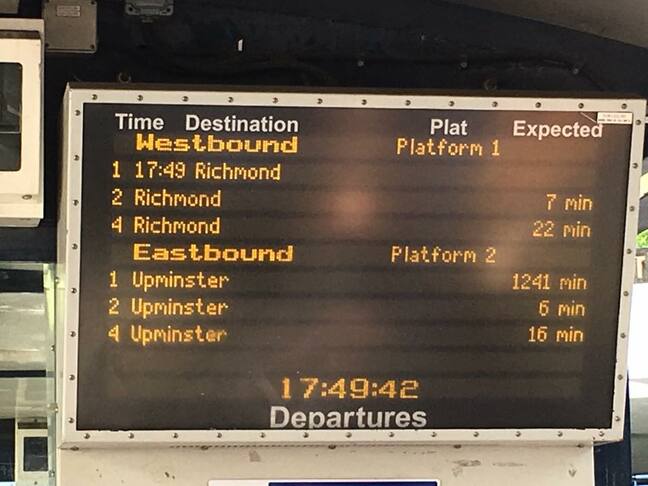 Certainly, back in the days when we used to travel London’s creaking public transport network to Vulture Central, a wait of more than a few minutes was enough to trigger tuts and sighs from the locals. Almost as much as those generated by that person with the rucksack or those people unable to resist the allure of their horror burger and fries on a particularly lengthy underground stretch.

A spokesperson for TfL stated the obvious in telling us: “This appears to have been an error on one of our digital display boards which we worked to fix as soon as possible.”

Indeed it was, for the display predates the current lockdown by a good while. Now, we remember lengthy delays on its network with fondness. In this case, 1,241 minutes into the future (not the best of the Max Headroom sequels, we’ll grant you.)

The station before Kew Gardens and Richmond, the two platforms of Gunnersbury serve both the District line and London Overground and the station itself was opened in 1869. Back in 2017 (shortly before this picture was snapped), Gunnersbury saw its London Underground entry and exit figures standing at 5.71 million, slightly down on the previous year but quite the jump from 2007’s 3.66 million.

We suspect 2020’s number might look a bit different.

Waiting for the train that never comes? To be honest, it feels like March will never end, so pass the time by sharing your own example of LEDs larking about or Windows demonstrating the robustness of ice in a furnace with an email to The Register’s desk of Bork. ®

OnePlus Brings Android 11 Experience of Zen Mode to Its Phones Running on Android 10
And now for something completely different: Ultraviolet aurora spotted around comet for first time
Google-Fitbit Deal Probe Extended by EU Regulators to December 23
IT guy whose job was to stop ex-staff running amok on the network is jailed for running amok on the network
Can The Register run Crysis Remastered? Yes, but we don’t see why you would want to