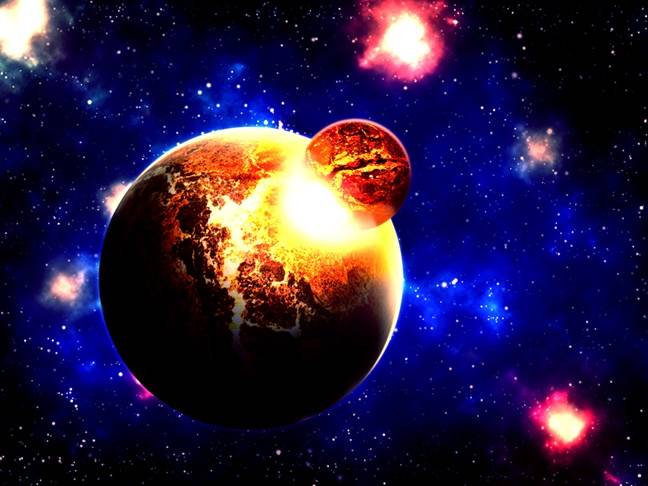 The result goes against a widely accepted theory that our home world’s natural satellite was born from a cataclysmic collision between a protoplanet named Theia and a young Earth some 4.5 billion years ago. If that theory is correct, the Moon should have roughly the same concentration of minerals as found on Earth.

But the data collected using the LRO’s Miniature Radio Frequency (Mini-RF) instrument hints that the Moon is much more metallic below its surface than previous estimates based on Earth’s composition. The Mini-RF gadget measures something called dielectric constant, the ratio of the electric permeability of a material to the permeability of a vacuum. A higher dielectric constant indicates the presence of metal, such as iron and titanium oxides.

Scientists led by the University of Southern California in Los Angeles examined the Mini-RF’s dielectric constant readings of spots where meteors had smashed into the lunar surface – and found that the deeper the impact, the more metallic material was present. That suggests some areas of the Moon are richer in some metals than the Earth, particularly the darker parts of our satellite’s northern hemisphere. Presumably, contamination from the meteors was, or can be, ruled out.

“It really raises the question of what this means for our previous formation hypotheses,” said said Essam Heggy, co-investigator of the Mini-RF experiments at the university, and lead author of a paper describing the findings, published in the Earth and Planetary Science Letters on Wednesday.

Their results were also backed up by metal-oxide maps that were collected by previous spacecraft, including Japan Aerospace Exploration Agency’s Kaguya lunar orbiter.

“This exciting result from Mini-RF shows that even after 11 years in operation at the Moon, we are still making new discoveries about the ancient history of our nearest neighbor,” Noah Petro, the LRO project scientist at NASA’s Goddard Space Flight Center, added.

“The Mini-RF data is incredibly valuable for telling us about the properties of the lunar surface, but we use that data to infer what was happening over 4.5 billion years ago.” ®