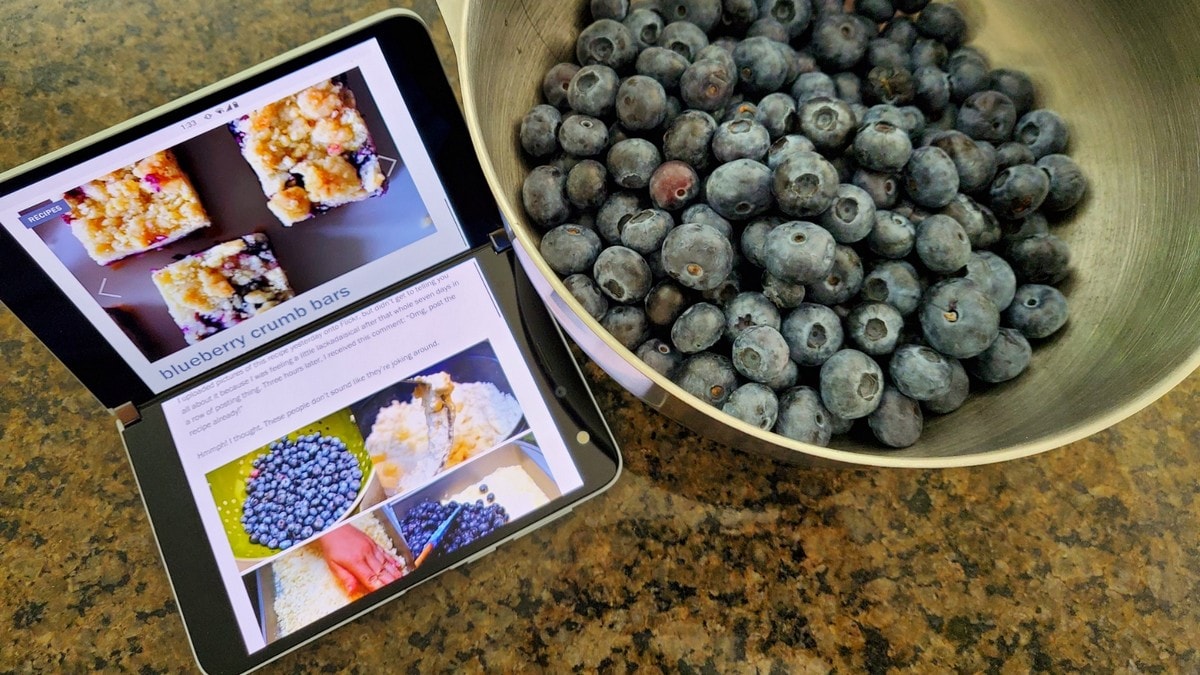 Microsoft Surface Duo has surfaced online in a video showing integration with other devices and software. The video appears to be a clip from ‘The Shiproom’ series on YouTube that is hosted by vice president of Microsoft 365, Brad Anderson. It shows Anderson using the Surface Duo to change the green screen background and, according to the VP, “control the Shiproom” through an app. This means the Surface Duo will be integrated with Microsoft’s own tools and software, and possible third-party software as well.

The video posted by MSPoweruser on YouTube is a short 37-second clip from Microsoft’s ‘The Shiproom’ where Brad Anderson speaks with influential leaders about productivity to new technologies. It shows Anderson using the Microsoft Surface Duo to change the green screen background just by swiping on the screen of the Surface Duo. Then, Anderson goes on to use the dual-screen phablet device to change the colour of a colleagues T-shirt, presumably using the same app as the one for the green screen backgrounds.

Just yesterday, Shilpa Ranganathan from the Microsoft product experiences team also shared an image on Twitter showing the Surface Duo. Additionally, the Microsoft Surface Duo was recently spotted on the US FCC and Bluetooth SIG websites with LTE support and Bluetooth v5.0 respectively. While the FCC listing mentions a “Microsoft Corporation Phablet Device 1930”, the Bluetooth SIG listing calls it the “Surface Duo”. Notably, the model number 1930 is common between the two listings, both of which were verified by Gadgets 360. The FCC listing was first spotted by Droid Life.

The Twitter teaser, YouTube video clip, and these listings could indicate that the Microsoft Surface Duo will be unveiled soon. The official website states that it will be launched “Holiday 2020” without an actual date. Back in March, it was reported that Microsoft is planning on launching the Surface Duo much earlier than the originally planned launch date. This could mean that the dual-screen phablet will be unveiled as early as August or September.

Not a lot is known about the specifications of the Microsoft Surface Duo. It will run on Android and is said to come with two 5.6-inch screens. The Twitter teaser shows dual front cameras and the website states it will have a 360-degree hinge.

Is Redmi Note 9 the perfect successor to Redmi Note 8? We discussed this on Orbital, our weekly technology podcast, which you can subscribe to via Apple Podcasts, Google Podcasts, or RSS, download the episode, or just hit the play button below.

Mi Smart Speaker Expected to Launch in India on September 29
IT guy whose job was to stop ex-staff running amok on the network is jailed for running amok on the network
TicWatch Pro 3 GPS With Snapdragon Wear 4100 SoC, Up to 72 Hours Battery Life Launched
All those ‘teleworking is the new normal’ predictions? Not so much, says employers
Alphabet promises to no longer bung tens of millions of dollars to alleged sex pest execs who quit mid-probe