WordPress for iOS finally received a new update yesterday (August 21) after a period of almost a month. Turns out, the Automattic team that runs the app as well as popular WordPress.com blogging service was blocked by Apple from pushing new app updates as it was not offering an in-app purchase option for WordPress.com’s paid plans and domain purchases, the company’s founder and CEO Matt Mullenweg has revealed. The presence of in-app purchases in the WordPress app would allow Apple to take up to 30 percent cut of all revenue that the app generates using the in-app purchases.

“Heads up on why @WordPressiOS updates have been absent… we were locked by App Store,” Mullenweg wrote on Twitter. “To be able to ship updates and bug fixes again we had to commit to support in-app purchases for .com plans.”

At the time of publishing, the Automattic team had already relented and conveyed to Apple that it would add in-app purchases in the WordPress.com within 30 days. This surrender led to the resumption of app updates for WordPress for iOS app.

WordPress (and the app) are GPL, and App Store TOS and DRM violate GPL. Thus only the copyright holder can submit an app for all of WordPress, both self-hosted and https://t.co/WHTtnmKYAZ.

To be clear, the app doesn’t sell anything, and why would it? It’s an open source project. Apple is requiring the addition of functionality that has no plausible reason to exist.

WordPress is a free and open-source content management system that is developed by the WordPress Foundation. The foundation is a charitable organisation that runs mostly on donations. It offers free-to-use CMS software that is massively popular and used by over 60 percent of websites around the world that employ any known CMS. 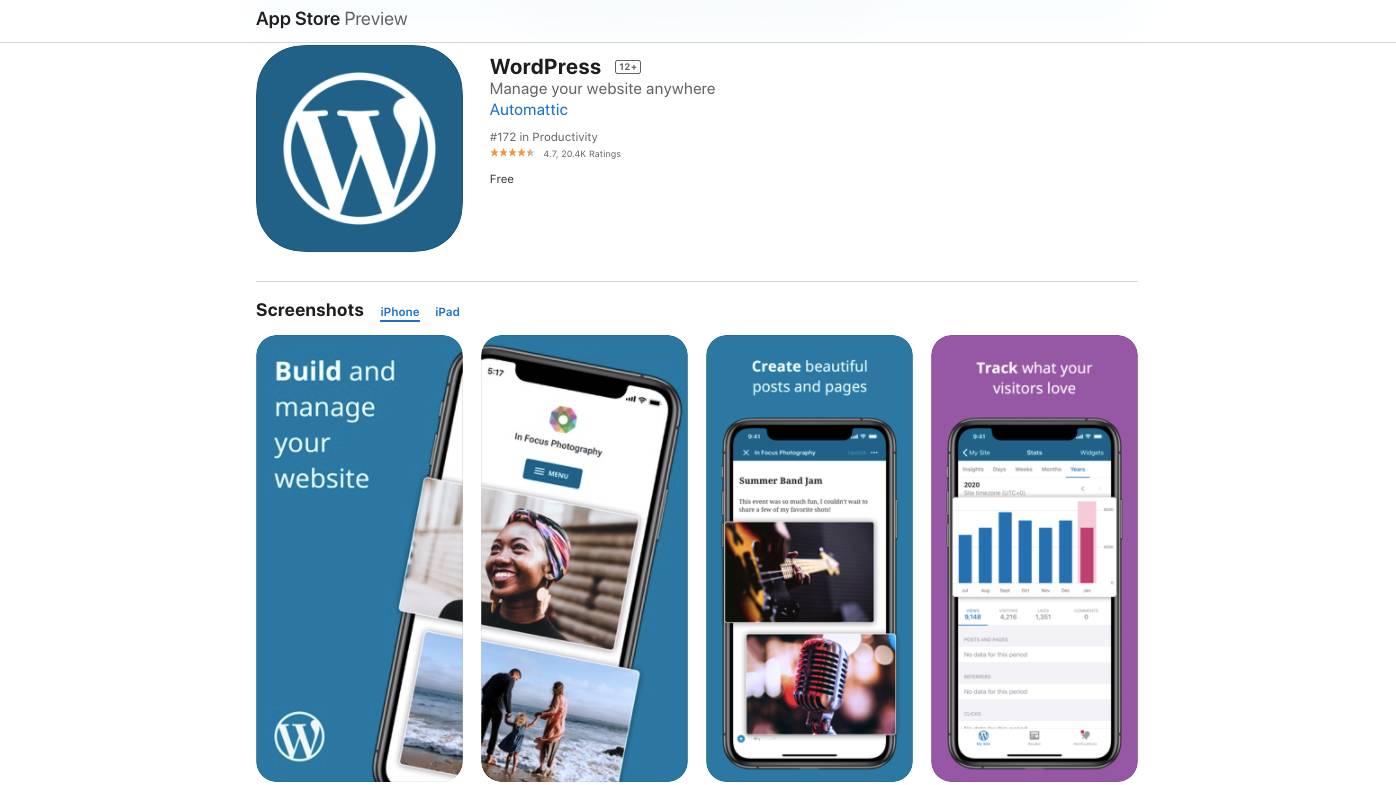 WordPress app can be downloaded for free from Apple App Store

WordPress Foundation was co-founded by Matt Mullenweg who is also the founder and CEO of Automattic, which is a for-profit entity that runs WordPress.com. WordPress.com is like Blogger or Medium. It doesn’t provide a software to self-host websites but allows users to create blogs and websites on its own platform. As a base, WordPress.com also uses the WordPress CMS but feature-set is limited and restrictive.

Coming to the WordPress app, as mentioned, it is provided and maintained by the Automattic, and is free to use and open source. It not only works as the official app for WordPress.com websites but can also be used by people using WordPress CMS on their own servers.

Still, any impact on the functionality of the official WordPress app has major consequences for webmasters around the world. Thus, Apple blocking important updates to this app is a major deal.

What was WordPress doing wrong, at least in Apple’s eyes?

While the WordPress app itself doesn’t sell anything and is free-to-use for anyone, it has support pages that send users wanting to purchase one of paid WordPress.com plans or domains to a webpage on its website using webview (an internal browser). This was reportedly the bone of contention and why Apple wasn’t allowing the Automattic team to push app updates until WordPress app brings this whole plan purchase process within the app using the in-app purchase mechanism.

When I open the Help Center from the app, I can get guidance about upgrading to one of your paid plans. If I tap on “Plans” as seen the screenshot, the app opens Safari and shows the plans. This is a violation according to App Store Review Guidelines. pic.twitter.com/peTcdn5DZo

According to Mullenweg, the Automattic team told Apple that they could block the support pages that talked about the paid plans in the iOS app; however, Apple rejected the offer.

There are a few convoluted ways you can get to our web app from within previews, documentation, etc. We offered to block based on user agent server-side, but that was not deemed sufficient.

With no other option apart from publishing another app that included in-app purchases and fixing the current one of get rid of any and every paid plan mention, the Automattic team will now be adding in-app purchases in the WordPress app.

Mullenweg’s revelations on Twitter about Apple’s arm twisting have caused an uproar at a time when Apple is already dealing with the Fortnite makers on both legal and PR fronts for removing the hugely popular game from its App Store for adding another payment mode for in-app purchases that would have left the Cupertino, California-based giant without any cut.

Fortnite developers aren’t the only ones with an issue with revenue share taken by Apple or the so-called Apple tax. Spotify has time and again pushed back. Regulators are also looking into Apple and whether there are any antitrust issues with the App Store.