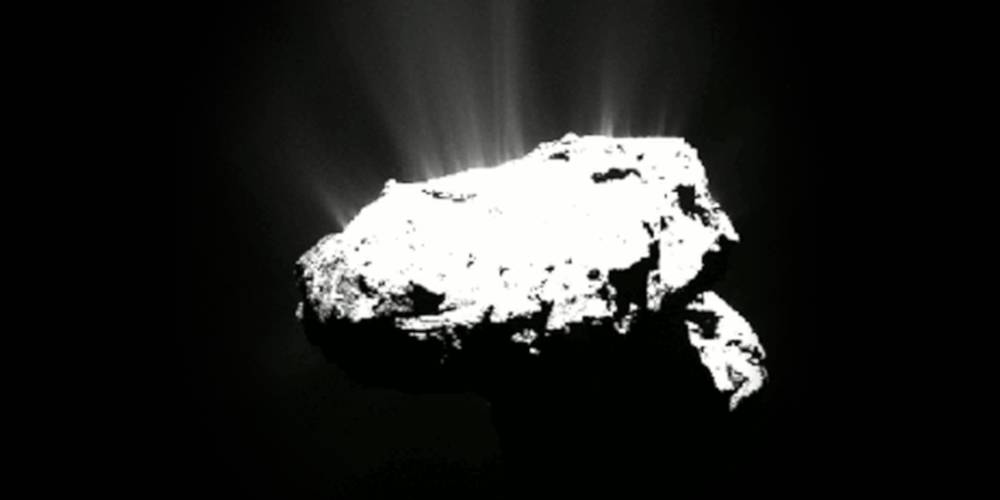 GIF Astronomers have discovered an aurora in an unlikely place: Comet 67P.

It’s the first time the phenomenon has been detected around an astronomical object that wasn’t a planet or a satellite.

The space rock, officially known as 67P/Churyumov–Gerasimenko, was studied in 2014 by the European Space Agency’s Rosetta spacecraft and its lander Philae.

The robotic companion didn’t do so well. Ground control quickly lost communications with the robot after it landed in an awkward shady spot that prevented it from receiving enough solar energy to power up its instruments. Rosetta, on the other hand, was a success and continued to orbit the comet until it was retired in 2016.

Now, after digging through some of the data collected by the spacecraft, a team of scientists have found evidence of a far-ultraviolet aurora in Comet 67P’s atmosphere.

“The glow surrounding 67P/C-G is one of a kind,” said Imperial College London Professor Marina Galand, first author of a report detailing the discovery that was published in Nature Astronomy this week. “By linking data from numerous Rosetta instruments, we were able to get a better picture of what was going on. This enabled us to unambiguously identify how 67P/C-G’s ultraviolet atomic emissions form.”

After closer inspection, they discovered that the emissions were created by the same process that generates the northern and southern lights on Earth. Charged particles from the Sun’s solar wind strike molecules in our skies. These molecules absorb the energy and their atoms’ electrons jump to high-energy orbits before coming back down, emitting light we see as an aurora.

16 years and counting: How ESA squeezed oodles of bonus science out of plucky Mars Express probe

“Electrons of solar wind origin are accelerated towards the comet before they strike and dissociate cometary water molecules,” Martin Rubin, co-author of the paper and a senior physics lecturer at the University of Bern, explained to El Reg. “This process may leave the resulting hydrogen and oxygen atoms in an excited state which afterwards relax by emitting UV radiation, i.e. auroral emissions.”

The UV light is emitted at about 100 kilometres from Comet 67P’s surface when a large amount of water vapor is launched from its central core, something known as outgassing. Auroras typically “occur on a continuous basis as long as the outgassing activity is high enough,” Rubin told us. He reckons other comets have auroras too, depending on how far they stray from the Sun.

“The discovery of the presence of cometary auroral emissions induced by solar-wind electrons at large heliocentric distances offers the opportunity to use FUV [far-ultraviolet] emissions as a probe of the space environment at a comet location: observations could be used as a proxy for solar-wind electron variability, which would be very useful in space weather applications,” the paper concluded. ®