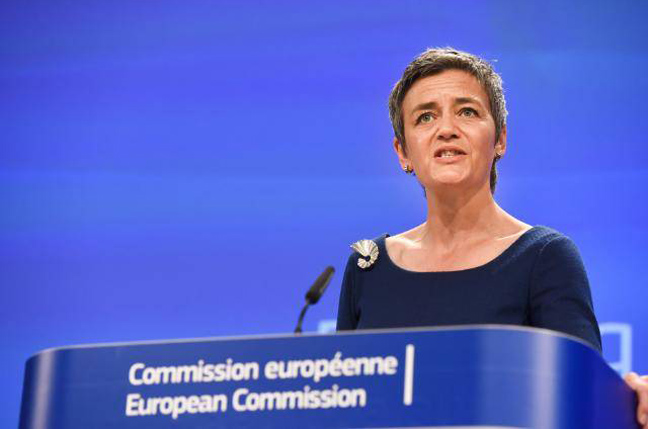 In July, the world-dominating consumer hardware and software firm had a €13bn (£11.6bn) tax bill overturned after the EU’s General Court said it was not the recipient of unlawful state aid from the Republic of Ireland.

The European Commission had failed to meet the burden of proof required to show Ireland was at fault, the General Court said.

An earlier European Commission ruling in 2016 said Apple received “state aid” by being allowed to avoid paying the huge sums of tax on EU profit. Ireland was asked to reclaim the cash.

In a statement, Vestager said the commission would fight on. It has decided to appeal against the General Court’s judgment of July 2020 before the European Court of Justice.

The General Court had repeatedly confirmed the principle that, while EU member states could set their own tax laws, they should do so in respect of EU law, she said. “If Member States give certain multinational companies tax advantages not available to their rivals, this harms fair competition in the European Union in breach of State aid rules. There’s more work ahead – including to make sure that all businesses, including digital ones, pay their fair share of tax where it is rightfully due.”

Apple has strenuously denied it does not pay its fair share of tax. “We’re proud to be the largest taxpayer in the world as we know the important role tax payments play in society,” the tech monster said when the General Court ruled in its favour. “Apple has paid more than $100bn in corporate income taxes around the world in the last decade and tens of billions more in other taxes.”

Apple CEO Tim Cook said in a 2016 open letter: “We never asked for, nor did we receive, any special deals.”

Apple paid the tax bill in 2018, with the money now sitting in an escrow account managed by the Irish government.

With the money set to remain in escrow until the appeal process is exhausted, the $1.8-trillion company will have to make do until it gets a final decision. ®

Micromax Plans a Comeback in India With ‘In’ Phones, Before Diwali
Facebook, Twitter CEOs to Testify Post US Election, Senate Panel Says
Coronavirus outbreak triggered a rush of online attacks against retail loyalty schemes, Akamai reckons
PUBG Unban? PUBG Corp Is Hiring In India, According to a LinkedIn Post
Apple AirTags Tipped to Launch Soon, May Come in Two Sizes