Samsung Galaxy A71 has reportedly started receiving the One UI 2.5 update in several countries. The update brings a host of improvements and fixes along with the latest October 2020 security patch. The Galaxy A71 was launched in December last year with One UI 2.0. Back in July, the smartphone was updated to One UI 2.1 that brought in several new camera features. Now, the Galaxy A71 has been updated with the latest Samsung skin, based on Android 10.

According to a screenshot of the changelog shared by SamMobile, the One UI 2.5 update carries firmware version number A715FXXU3ATI8 and a hefty size of 1014.82MB.

With the new update, Wi-Fi quality information will now be shown to users as Very Fast, Fast, Normal, or Slow, if quality information on nearby routers can be measured. Users can also request the password for a Wi-Fi router from another nearby user who is saved on their contact lists and has already connected to the same router.

The Samsung keyboard also gets several new features, including support for split keyboard on Landscape mode. Users can also directly search on YouTube from the keyboard. Upgrades in messages include a new feature that allows a user to share SOS location every 30 minutes for 24 hours.

The camera’s quality and stability has been improved with the new update. Additionally, Bitmoji stickers will now be supported on Always On Display (Clock style). The latest update brings with it the October 2020 security patch as well. 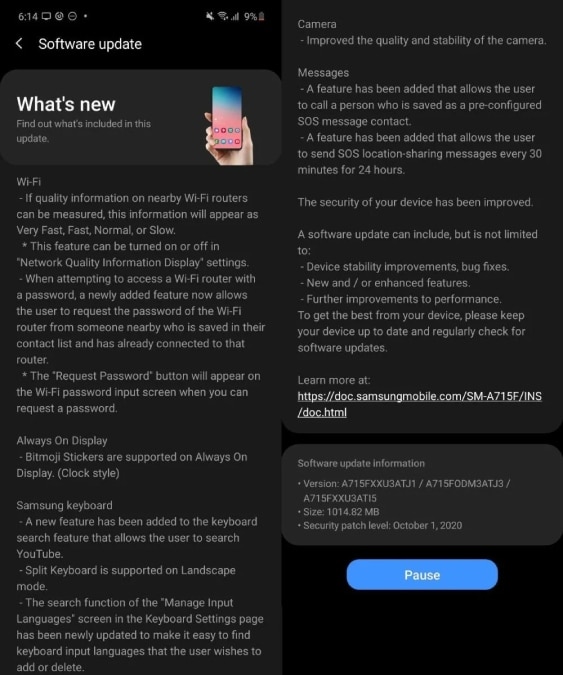 How to get One UI 2.5 update on Samsung Galaxy A71

To check if the update is available on your Samsung Galaxy A71, you can go to Settings > Software update > Download and install. Otherwise, you can simply wait for a notification to pop up for the same.

While the SamMobile report says that the update has started rolling out to several countries around the world, region-specific details weren’t shared.

iOS 14.1, iPadOS 14.1 Released With 10-Bit HDR Video Playback, Edit Support for Earlier Models
If you suddenly can’t print to your HP Printer from your Mac, you’re not alone: Code security cert snafu blamed
Facebook Moderators Pressured to Return to Hyderabad Office Despite COVID-19 Concerns: Report
VMware patches, among other things, ESXi flaw that can be abused by miscreants on the network to hijack hosts
Oppo Smart TV S1 With Up to 120Hz Refresh Rate Launched, Oppo Smart TV R1 in 55, 65-Inch Sizes Debuts as Well